Queen of the Babysitters 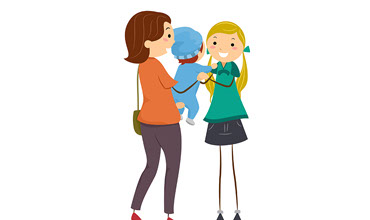 I was eleven years old and ready for adulthood when I took my first babysitting gig. Bring on the money, solo TV watching and being home alone (with Baby Hector, of course).

“Help yourself to whatever you like!” Mrs. Carmichael said, waving her hand around the kitchen. The Carmichaels were legendary junk food junkies. My family was not. I watched their tail lights exit the driveway. Freedom! I grabbed the phone, stretched the cord, flipped the TV off and on while Baby Hector sat in judgment. I sang him a song until I needed nourishment.

Opening the cupboard there were three boxes of Frosted Flakes. Now — Tony the Tiger seduced me every cartoon Saturday morning. I grabbed a bowl. Not big enough. Giants poured smaller bowls of cereal that day. I topped it off with a half carton of milk and dug in. When would I get another chance like this?

I didn’t get more than a mouthful when the Carmichaels pulled back up (botched reservation)! Panic doesn’t really describe my reaction. I popped up, bowl wobbling, like a criminal without a playbook. I calculated that I had about 30-45 seconds to ditch the evidence. I heard car doors slam as I ran to the kitchen. But how could I explain a sink full of Frosted Flakes? A lie wasn’t forming about holding their biggest mixing bowl either. In retrospect, I could have improvised. But thinking clearly in these situations wasn’t my jam. Instead, I chose the worst possible remedy.

I hid the bowl, with full contents, behind the TV.

How this could solve my problem I’ll never know. Did I think they wouldn’t find it? Was I counting on removing the evidence when I returned to babysit? Did I imagine the Frosted Flake fairies would handle it? Did I hope to just get out of there without having to explain myself? Reader, this is quite possible.

At any rate, I went from Queen of the Babysitters to Disgraced Cereal Shunter in a matter of 15 minutes.

Clearly, I am personally responsible for the Nanny Cam.

Cate Berry is an Austin-based children’s book author and mother of two. She also teaches writing workshops for young people at cateberry.com