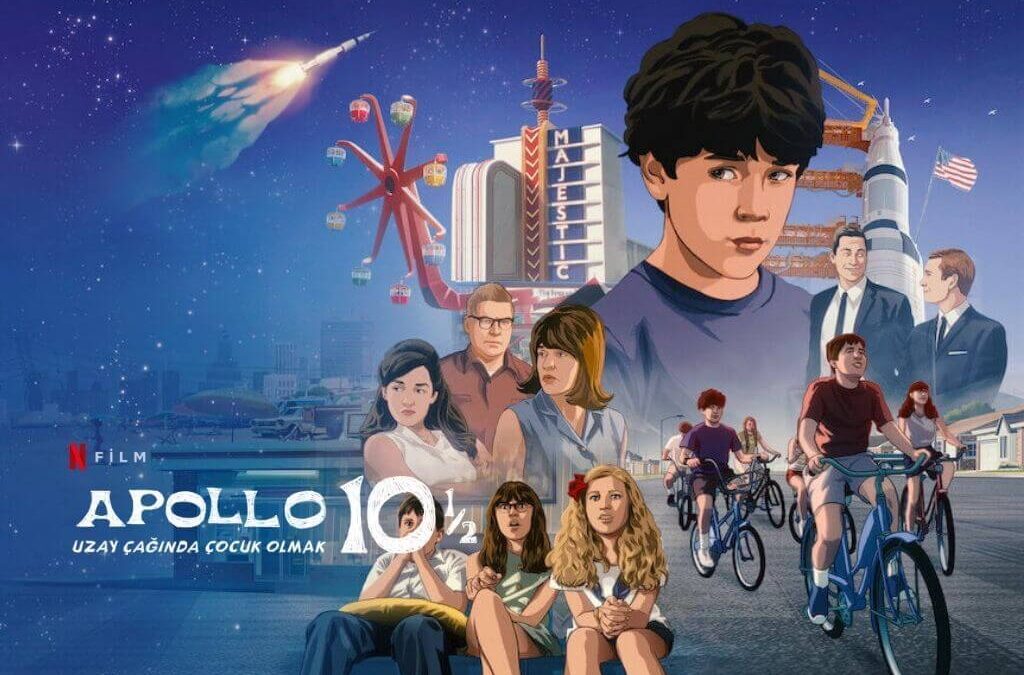 Richard Linklater’s latest film, “Apollo 10 ½: A Space Age Childhood,” is a joy to experience. This is Linklater’s third feature-length film shot using rotoscope animation (after “Waking Life” and “A Scanner Darkly”), and here, the stylized animation helps create an equal parts vivid and blurry account of the past – which is appropriate for a film modeled on Linklater’s own childhood memories growing up in Houston during the Space Age.

The year is 1969, and ten-year-old Stan (Milo Coy) is mesmerized by the Apollo missions being orchestrated just miles away at NASA. When the agency accidentally builds a lunar module too small for an adult, two officials (Glen Powell and Zachary Levi) recruit Stan to land this mini-ship on the moon. Although this top-secret mission is ostensibly the film’s A-story, it becomes fairly clear early on that we’re not supposed to take it at face value. This is, after all, a film about how the Space Race captured a child’s imagination.

Before we get to Stan’s mission, however, Linklater takes us on a welcome detour through a distinct time and place. Our narrator (a grown-up Stan, voiced by Jack Black) guides us through the cultural specificities of Texas in the late 1960s – from the long summer days of elementary school kids getting up to no good, to the television shows, movies and music that came to define the decade. The result is something resembling an animated hang-out movie (which is Linklater’s specialty) – and in an era where movies are becoming less and less fun, I’m happy to report that “Apollo 10 ½” is an absolute blast.

Eventually, we do come back around to Stan’s Apollo mission – but instead of going all-in on the fantastical concept of a ten-year-old landing on the moon, Linklater does something more interesting. On the day of the actual Apollo 11 launch, we intercut between Stan’s imagined voyage into outer space and the real spaceflight commanded by Neil Armstrong, Buzz Aldrin and Michael Collins. While Apollo 11’s trip to the moon is in progress, Stan and his friends spend the day at AstroWorld. He returns home exhausted and ready to fall asleep … just as Armstrong and Aldrin are set to land on the lunar surface.

I can’t think of a more characteristically Linklater third act than one in which our protagonist is literally falling asleep on his mother’s shoulder as man successfully lands on the moon. As Stan weaves in and out of consciousness, Linklater adopts a cinematic style that’s part dreamscape, part faithful recreation of the moon landing – both happening simultaneously.

Ultimately, this third act set piece serves as a beautiful representation of memory – one that outright acknowledges the fancifulness and embellishment we bring to our own recollections of the past. In that sense, the split presentation of the moon landing is entirely truthful, in that it represents how it felt for a kid in that era – the excitement, the desire to be involved, the imaginings in one’s head of what it would be like to reach the outer limits of our world. Linklater brings this theme home in a beautiful closing exchange of dialogue. As his mother and father carry a fully-asleep Stan to his bedroom, his father says, “I just want him to be able to tell his grandkids he saw the first steps on the moon” – to which his mother replies, “Well, you know how memory works. Even if he was asleep, he’ll someday think he saw it all.”

“Apollo 10 ½: A Space Age Childhood” is rated PG-13 for some rowdy horseplay among kids and cigarette smoking by adults – both of which are reflective of the period in which the film takes place. With that in mind, I think “Apollo 10 ½” is appropriate for most audiences over the age of ten. It is currently playing in cinemas and streaming on Netflix.