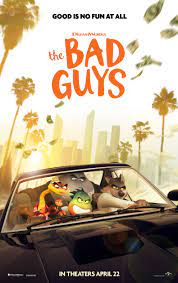 DreamWorks Animation’s “The Bad Guys” offers something surprisingly rare among recent animated films – pure, unadulterated fun. It unquestionably contains the moral undercurrent you’d expect from a film geared toward younger audiences, but it never feels like a lesson. The movie is gamely content to follow the escapades of a fun group of characters and ease up on the lecturing that’s rampant in modern kids’ films.

At its heart, “The Bad Guys” is a heist movie – think “Ocean’s Eleven” with animals. Sam Rockwell provides the voice of Mr. Wolf, the ringleader of the titular Bad Guys. His teammates are Mr. Snake (Marc Maron), Ms. Tarantula (Awkwafina), Mr. Shark (Craig Robinson) and Mr. Piranha (Anthony Ramos), and together, they roam around Los Angeles and make headlines for their high-speed chases and criminal behavior.

When the Bad Guys are finally caught during an attempted heist, wealthy benefactor Rupert Marmalade IV (Richard Ayoade) offers them an opportunity to change their ways, promising to present a newly reformed Wolf, Snake, Tarantula, Shark and Piranha at an upcoming ceremony. While most of the gang see this as an opportunity to pull off yet another heist, Mr. Wolf finds himself seriously considering abandoning his criminal tendencies and becoming a good Samaritan.

“The Bad Guys” is a breezy, wholly enjoyable piece of entertainment. I’d recommend the film for all ages. Outside of some mild bathroom humor, it’s truly a film for the entire family. The movie is now playing exclusively in cinemas.