Be Prepared and Plan Ahead: Fire Safety Tips 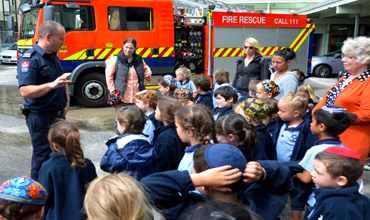 How do I test a smoke alarm to see if it’s working properly?

Find the smoke alarm’s test button and press it. If working properly, you’ll hear a very loud beep. If the sound is weak or there isn’t a sound, it’s time to replace your batteries, or the whole device if it’s a sealed-battery alarm. Test smoke alarms at least twice a year.

When do I replace a smoke alarm and what types of alarms are out there?

Smoke alarms should be replaced according to the manufacturer’s recommendations, which is usually every 10 years, or when they stop working, whichever comes first. If your smoke alarm is more than 10 years old, install new alarms and look for products that are third-party listed or certified.

At the end of the day, the best type of alarm is a working smoke alarm. Smoke alarms can differ in the sensors and technology used to detect smoke.  Newer technology can even better differentiate between cooking smoke and smoke from a fire.

Describe the ins and outs of properly placing a smoke alarm in the home.

With only three minutes or less to escape in the event of a fire, smoke alarms give you and your loved ones the earliest warning possible so you can get out of your home quickly and safely. It’s important to have working smoke alarms installed on every floor of your home, including the basement, as well as inside each bedroom and outside every sleeping area.

If possible smoke alarms should be interconnected so when one sounds, they all sound.

What is a fire escape plan? Explain “Close Before You Doze.”

In Plan A, you exit through the nearest exit, most likely a door, close the door behind you and head to your family’s meeting place to call 911.

In Plan B, you exit through an alternate exit, which could be a window or a door located in a different part of the home, and, if you can, close the door or window behind you before going to your family’s meeting place to call 911.

In Plan C, if you can’t get out, you get behind a closed door as far away from the fire as possible, turn on the light and do whatever you can to let the fire department know where you are inside the home. Cover the cracks with clothes, towels, drapes or anything else available.

What else can parents do to improve home fire safety if they already have working smoke alarms inside their homes?

In addition to having working smoke alarms, implementing a fire escape plan and practicing Close Before You Doze, everyone should have a fire extinguisher in their home. However, household fire extinguishers are intended for use only when the fire is contained, such as when something is burning in a pot or wastebasket or to clear a pathway for escape.

What are some common mistakes when it comes to fire safety and the home?

According to FSRI’s latest Annual Fire Safety Survey, released this month, while 68% of Americans have a fire escape plan for their home, 21% of those people have never reviewed or practiced it. It’s important to plan and practice your escape plan to increase your family’s preparedness in the event of a fire, enabling them to react more quickly and safely.

Additionally, our survey revealed that despite the fact half of Americans believe it’s safer to sleep with their doors closed in the event of a fire (50%), an equal amount say that they still sleep with their door open at least some of the time. Our research proves that a closed door could save lives in a fire. Make closing your doors part of your nightly routine.