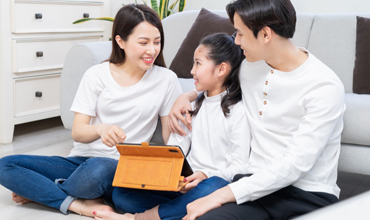 With the proliferation of digital devices and the program options available on them, it has become easy for everyone to retreat to their own corner with their own media. This became absolutely necessary during the pandemic, when parents had to rely on kids being occupied while they did their jobs. These changes in viewing practices have been helpful in ways large and small, but I wonder if we have lost moments of connection.

When my son was a toddler, we watched an episode of Super Why called “George and the Dragon.” In this episode, through spelling and word identification, George and the Dragon go from enemies to friends. And while George thought he was saving the Princess, she was not scared; the Dragon was simply blocking her door.

Immediately after, my son related the entire thing to me – the plot, the key letters and most important words in the episode. I thought, “I know! I was at your side!” but I just listened. Later, I realized that through his talk, he was solidifying his understanding of what he had seen and was sharing what he knew with me, his dad.

I know firsthand how hard it can be to pull away from work and it can be tempting to see a child contentedly occupied with a device and think, “She’s okay.” But if you get a chance, plop down with your kid and share a moment of viewing smart stuff together. You may be surprised at what comes from it.