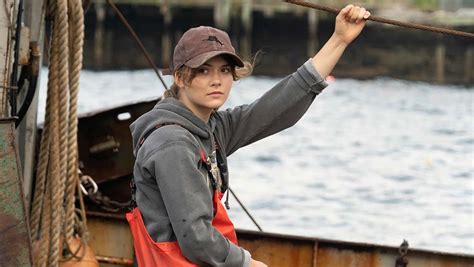 Sian Heder’s “CODA,” a breakout hit at this year’s Sundance Film Festival, is a warm, heartfelt coming-of-age story told from a unique perspective. I first became aware of the term CODA (Child of Deaf Adults) last year, upon watching the Oscar-winning film Sound of Metal that dealt with a heavy metal drummer’s loss of hearing. The film features an astonishing performance by Paul Raci, who was raised by deaf parents and grew up using sign language to communicate with his family.

Here, the CODA in question is Ruby (Emilia Jones), a teenager living in the fishing city of Gloucester and the only non-deaf person in her family. This understandably puts a great deal of pressure on her – Ruby is the go-to interpreter for her family at everything from doctors’ appointments to business discussions regarding the family’s fishing boat. The film’s primary hook is that Ruby loves to sing. She’s shy and embarrassed to perform in public, but upon noticing that her crush Miles (Ferdia Walsh-Peelo) is signing up for their high school choir class, she impulsively signs up as well.

The scenes depicting Ruby’s home life and her initial experience in choir offer a wonderful contrast. Her parents, Jackie (Marlee Matlin) and Frank (Troy Kotsur), are colorful and unfiltered (to put it mildly), and her brother Leo (Daniel Durant) is a heartthrob who shares a little too much at the dinner table. An interesting detail is the amount of noise that surrounds Ruby in her home. Because everyone else in her family is deaf, they don’t hear how loud they truly are.

We quickly come to understand that Ruby’s singing is her form of expression. In a moving sequence near the film’s beginning, Ruby is too embarrassed to sing in front of her class. She flees, runs to a secluded spot in a nearby forest and sits alone. And then, for the first time, we hear her singing voice – and it’s astonishing.

Later, when expressing her doubts about her voice to her eccentric choir teacher, Mr. Villalobos (Eugenio Derbez), he offers her some unique advice. “Do you know what [David] Bowie said about Bob Dylan?” She shakes her head. “A voice like sand and glue. There are plenty of pretty voices with nothing to say. Do you have something to say?” And from that point forward, Mr. Villalobos refers to Ruby as “Bob.” With new pressures placed on the family’s fishing business, however, Ruby is torn between pursuing a future in music (Mr. Villalobos persuades her to apply to Berklee) and working on her family’s boat.

“CODA” has so much to offer – wonderful performances from everyone involved (particularly Jones), an excellent soundtrack and a major step forward in terms of deaf community representation (Matlin, Kotsur and Durant are all deaf actors).

The film is rated PG-13 for some suggestive material (usually involving Ruby’s parents), but it’s a deeply relatable movie for teenagers just entering high school. I’d recommend the film for ages thirteen and above. “CODA” is available to stream now on Apple TV+.