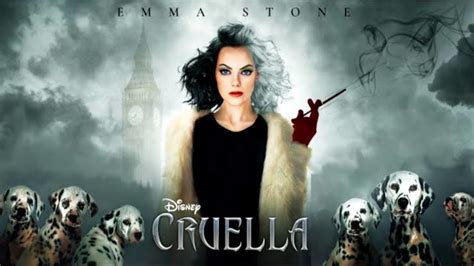 I went into “Cruella,” the latest live-action reimagining of a classic Disney character, with little to no expectations. Typically speaking, I’m not a huge fan of reboots, as they often feel unnecessary at best and like cynical cash-grabs at worst. But I can also truthfully tell you I had a blast throughout the film’s entire 134-minute running time. And after a year where the cinema offerings were often as dour as the nation’s headlines, a good time at the movies is not to be taken for granted.

But I should have known “Cruella” might be more interesting than other films of its ilk based on its pedigree alone: director Craig Gillespie is a talented filmmaker with a specialty for off-kilter character studies. With “Cruella,” he brings a kinetic style and energy that offers a refreshing edge. Well, as much of an edge as modern Disney will allow – you won’t find the villainess smoking her iconic cigarette in this iteration.

Emma Stone stars as Cruella de Vil, born as Estella Miller to a working-class British mother, Catherine (Emily Beecham). From an early age, Estella is possessed with both immense artistry and a flair for mischief (thus the black-and-white hair). Catherine steers Estella away from her darker impulses, instead encouraging her aspirations to become a fashion designer. That is, until Catherine is mauled by a pack of Dalmatians and sent flying off a cliff, which pretty cleanly sets up Cruella’s disdain for canines. Devastated, young Estella flees to London and finds a home with her future henchmen, Horace (Paul Walter Hauser, always excellent) and Jasper (Joel Fry).

By the time Estella is an adult, she lands a job working for London’s premier fashion designer, Baroness von Hellman (Emma Thompson). Estella initially wants to be the Baroness, but after discovering her ruthless employer’s involvement in her mother’s death, she adopts the Cruella de Vil persona by night, making a splash in the London fashion scene by upstaging the Baroness at every gala.

Needless to say, the costumes in “Cruella,” designed by Oscar winner Jenny Beavan, are among the film’s highlights. Even if the picture isn’t one’s cup of tea, there’s great entertainment to be found in the colorful and vibrant costume and production design alone. Gillespie also goes nuts with the film’s period-appropriate soundtrack, seemingly employing every major pop song from the British Invasion of the 1960s. At times, “Cruella” is relentless in its energy, and that’s partly why it works so well. It’s not a perfect film, but it’s never boring.

Stone, Thompson, Hauser and Fry are excellent, as is Mark Strong, playing the Baroness’s assistant. Though the film risks dragging as it approaches the third act, I honestly didn’t mind – “Cruella” is a welcome escape from the outside world, and the time spent inside a cinema with a delighted audience at the Regal Arbor at Great Hills was a pleasure.

“Cruella” is rated PG-13, and has been appropriately marketed as one of the “darker” Disney titles of recent years. That being said, the film steers clear of any violence against animals, and though I wouldn’t say it’s for young children, it does seem appropriate for ages ten and above.