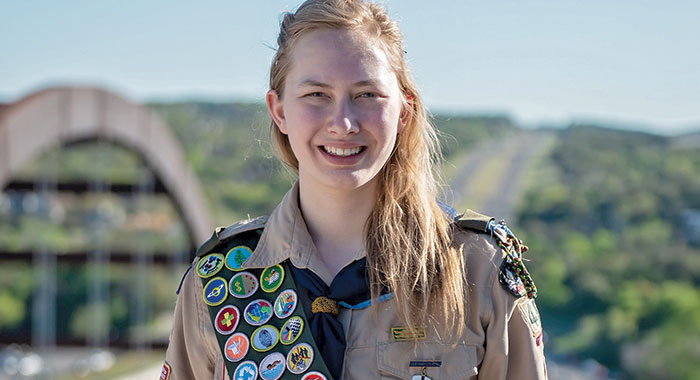 Tina Carter is one of the first girls to earn both the Girl Scout Gold Award and Boy Scouts of America (BSA) Eagle Rank. Congratulations, Tina!

This local Austinite has enjoyed scouting since kindergarten. Starting as a Girl Scout, she worked her way up to earn Girl Scouts’ highest award, the Gold Award. In 2019, Tina joined BSA Troop 4540, in large part because of its emphasis on outdoor adventures. She recently earned the Grand Slam of High Adventure after camping on the ice at 40-below-zero at Okpik (Northern Tier), backpacking through the Sangre de Cristo Mountains at Philmont Scout Ranch, paddling 50 miles down the New River at Summit and sailing 120 miles through the Florida Keys at Sea Base.

Her projects for both the Gold and the Eagle awards benefited the local community. She improved the safety of a horse-trail street crossing and led a neighborhood tree-planting effort.