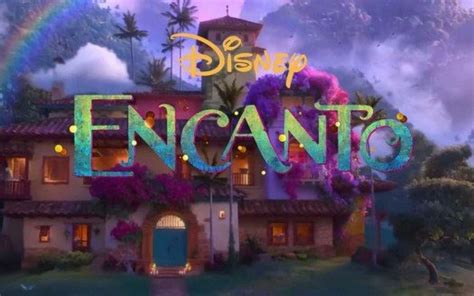 Byron Howard and Jared Bush’s “Encanto” (which the opening logo proclaims as Walt Disney Animation Studios’ 60th Animated Motion Picture) is a vibrant, lively and entertaining musical. The original songs are by Lin-Manuel Miranda, who seems to be the busiest man in show business at the moment – and his talent is certainly not wasted here. The musical numbers represent the high points of “Encanto,” with several of the songs already hitting the Billboard Hot 100 chart.

In the mountains of Colombia, there is a magical house known as the Casita, overseen by Abuela Alma Madrigal (Maria Cecilia Botero). When she was a young woman, Abuela fled her small town in Colombia as outside forces invaded the area. While her husband Pedro died at the hands of the invaders, Abuela and her three children were blessed with a candle (the “Encanto” of the title) that created a magical fortress for the family. But the house isn’t the only thing that’s imbued with magic – each of Abuela’s children and grandchildren receive “gifts” at a young age. For Abuela’s daughter Pepa (Carolina Gaitan), it’s an ability to regulate the weather; for her granddaughter Luisa (Jessica Darrow), it’s immense physical strength.

However, in the case of Mirabel (Stephanie Beatriz), Abuela’s youngest granddaughter, her gift is… nothing. This is a source of embarrassment for both Mirabel and her family, and it places our protagonist as an outsider amongst her supremely talented parents, sisters, aunts, uncles and grandmother.

Naturally, when cracks start appearing in the Casita and the “magic” begins dying, the blame falls squarely on Mirabel. While Abuela clearly believes Mirabel’s lack of a “gift” is the cause of the house’s deterioration, Mirabel suspects something else is afoot – and the answer may lie with her reclusive Uncle Bruno (John Leguizamo), the black sheep of the family. (One of the more memorable musical numbers in the film is titled “We Don’t Talk About Bruno.”

If the overall story seems a little slight, the stunning visuals more than make up for it – “Encanto” is nothing if not pleasing to the eye. The film also harkens back, at least a little bit, to the Disney films of the 1990s, in that it’s not a Pixar-esque spin on inanimate objects come to life or (thankfully) a moral lecture, which is all too common with animated films these days. Yes, there’s a message – it’s a Disney movie, after all – but every beat of the film isn’t bludgeoning the audience with its thematic concerns. There’s room for fun in the proceedings, and with such a magical world at the center of “Encanto,” that’s a good thing.

“Encanto” is rated PG for some thematic material, but I can’t think of anything objectionable in the film for younger viewers. I’d recommend the film for ages four and above. “Encanto” is now playing in cinemas and streaming on Disney Plus.