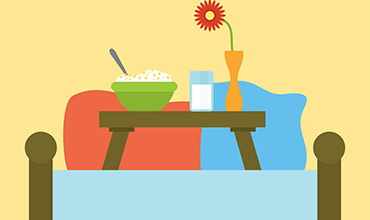 “People should know,” the therapist said, “parenting is not gratifying.”

I released an awkward “HA!” Did he just say that? Out loud? New mothers really shouldn’t hear this. Or any mother, rookie or veteran. The proclamation was irresponsible. (And thrilling.) And rude. (And thrilling.)

I had imagined my first Mother’s Day. We’d wake. My husband would take the babe and bring me breakfast in bed on a tray with a single rose. He’d know, without asking, that I’d like French toast and berries. It would be delivered with a card he’d bought the moment our son was born, thinking ahead. We’d snuggle together drunk on serotonin and our son’s sweet-smelling scalp. I’d breastfeed and bond, now in The Club. After five years of trying, our son had finally arrived. Beautiful. And large.

He screamed for the first five months of his life and I found this particularly not gratifying. Other things not so gratifying: getting an eye full of pee before coffee, clicking “yes” to Amazon’s air-traffic quality control noise-canceling headphones, dodging the streamlined diarrhea assault of 2006, surviving the chamber of late-night worry, the great breastfeeding boob rebellion of week two.

It’s not that my first Mother’s Day was a let-down. It just wasn’t gratifying as the pros say. It is tucked away into the soft tissue of my memory. I trot it out every year if I’m feeling nostalgic. Blah blah “get a towel!” blah blah “I need vomit backup” blah blah blah “More incoming— more incoming.”

Seeing my husband in the nursery door frame holding red wine at 7:28 a.m.? That I remember.  Also, the plate of two shriveled turkey sausages. All for me. That is a Mother’s Day memory I’ll cherish.

As I move from rookie to veteran mom this fourteenth year, I find many things still not gratifying. But the good news is, age mellows you. And with it, the gratifying luxury of memory loss.

Cate Berry is an Austin-based children’s book author and mother of two. She also teaches writing workshops for young people at cateberry.com