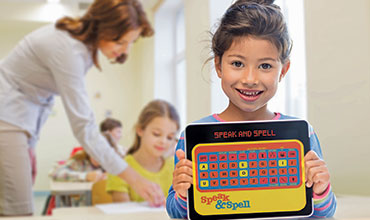 Did you have a Speak & Spell? I got one after seeing it in the movie “E.T.” and I was obsessed, especially with its version of hangman: Mystery Word! I showed a Speak & Spell to my Generation Alpha sons recently and you’d think I’d shown them an artifact from prehistoric times. No graphics! No color! And that
computer voice!

Every once in a while, I get little reminders that my kids are growing up in a very different world. Generation Alpha, or kids born after 2010, are going to be unlike any of their predecessors, especially now, thanks to the pandemic. If you’ve got kids in this group (or one on the border), here are seven things you need to know about them.

1. They represent a brand-new start.

In naming Generation Alpha, some suggested “Generation A” since we’d just had X, Y and Z. But choosing “A” would be like going back to repeat what has already happened. This is the first generation to be born entirely in the 21st century, so “Alpha” was chosen intentionally to represent the start of something completely new. Many of us are putting a lot of hope in these kids

2. Many have a digital presence starting at birth.
A generation of children is shaped not only by the environment around them but also by the people parenting them. My Boomer parents still don’t care about technology or having an influence outside the people sitting around our Sunday dinner table. Generation Alpha is being parented primarily by Millennials, so many have had their names and faces online since birth, and some even have their own social accounts set up for them. The impact of that – not knowing true privacy or anonymity – is profound.

3. They will be more financially advanced.
We saved up cash in piggy banks to buy candy or to raid the aisles at Toys R Us once a year. Meanwhile, our kids are able to spend money from the couch on an ordinary Friday night. With one $10 Robux gift card, they will get more practice in spending and budgeting than we did in a year. The challenge, as we all know, is making the connection between virtual money and actual money.

4. And therefore they have spending power.
A 2016 Cartoon Network New Generations study revealed that children ages 4 to 14 have an annual spending power of $1.8 billion. You and I had influence over the economy by shouting during Saturday morning commercials – “Mom! Will you buy me that for my birthday?” – and then praying she’d actually buy it. Meanwhile, Generation Alpha can make spending decisions daily. If you think kids were being marketed to before, just wait.

5. They are adaptive.
Short of call waiting and CDs, our childhoods didn’t require much adaptation to new technology. These kids have done it since birth and now they’re helping their grandparents adapt. As your Generation Alpha daughter helps her Nana transfer her vacation photos to the cloud, she’s growing in self-esteem. This will serve her well as she grows up and is eager to adapt to new things.

6. They see life in terms of services and goods.
I watched a documentary about the only remaining Blockbuster Video in the United States. One interviewee shared how sad she was to see the end of the act of going to the store, selecting and taking home the videocassette, and then,
of course, rewinding it before returning. Generation Alpha will grow up with video streaming as just one of many services that have replaced goods. Their understanding of a need for “things” will be quite different from ours and a complete 180 degrees from their Boomer grandparents, who were raised by
parents who experienced the Great Depression.

7. They don’t have the same respect for hierarchies or traditional power.
This isn’t to say kids in Generation Alpha don’t respect authority. They just have a different experience with how power can be exercised. One person on Twitter can be heard by just as many people as the president on a nationally televised address. Kids in Generation Alpha know that everybody has the power to get their voices heard. Let’s hope they can be more discerning about which voices are wise enough to listen to.

BONUS: Generation Alpha lived through a pandemic.
Anyone reading this lived through a pandemic, but these kids were between the ages of 0 and 10 when COVID-19 hit home. The question is not if it will affect them but how. The downside is that many kids lacked much social interaction during these key years. But the upside is they spent more time with their families and witnessed resilience and positivity in a time of major stress.

Abby Watts is a wife and mother of two. She’s the content manager for iMOM.com, a program of the national nonprofit, Family First. This article originally appeared on iMOM.com and was used with permission.