Helping Children To Have Better Behavior 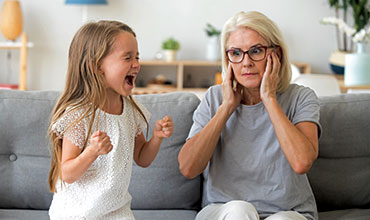 Q.  I’m the grandmother of five grandchildren of varying ages. None will do what I say when I ask them to put away toys or help with chores. I hear, “I don’t want to. You can’t make me.” I know teachers who complain that the behaviors in school are much worse than they have ever been. They describe more bullying, fighting, cussing and not following the teachers’ directions or the rules. What is causing these unacceptable behaviors? How can I get better behavior from my grandchildren?

A. You ask what causes kids to refuse to do what you or others ask of them. The simple answer is the lack of consequences for their behavior. A more complex answer includes the fact that kids are suffering from not having gone to “in person school” and thus they have become out of the habit of following classroom rules. Other causes include seeking attention and feeling frustrated due to a lack of confidence or skills. A common reason that kids misbehave is that they get something out of acting out. In an article entitled “Breaking the Behavior Code,” experts explain that “usually it is a response from other people that fuels inappropriate behavior.” Whining and cursing get attention from adults. Sometimes this behavior may get children sent from the classroom or to their room, which grants them the escape they were seeking. Parents, grandparents, teachers and others dealing with inappropriate behavior need to identify the reason behind a child’s acting out. Not getting needs met can be a factor. Additional causes can stem from curriculum-related struggles and the classroom environment.

Mental health problems and staff or caregiver exhaustion can also lead children to misbehave. According to research reported by The Child Mind Institute, every classroom usually has one or two students dealing with stressors associated with poverty, neglect, abuse or trauma. Teachers can, and do, report suspected abuse or neglect. If parents don’t get care for children with mental health issues, it’s often because they don’t know where to go or believe they cannot afford the care. Searching online for local, free or low-cost mental health care for children can offer several options.

How can you get better behavior from your grandchildren? Instituting consequences for the undesirable behavior is the answer. Another grandmother told me she was in the pool with several kids who were strangers to her. The kids had scattered toys all over the pool. The children started to leave without picking up the toys. This grandmother, a former teacher, said, “you have to pick up and put away the pool toys.” They responded with, “We don’t want to.” She informed them that unless they picked up the toys, they could not come back to the pool. The toys were picked up. If kids don’t help with kitchen chores around meals, the consequence might be “no dessert unless you help.” Even little kids can understand consequences.

Some readers who have never used consequences and have very well-behaved kids may argue that consequences are not necessary for good behavior. They should consider themselves lucky, or perhaps their children get the attention they crave by being good. Or maybe these parents shoot that look that my dad gave me which said, “You’ll regret it if you get out of line.”

What’s important when a child does misbehave is to determine the reason for it and to set clear, logical consequences for misbehavior. Equally important is to offer children positive reinforcement when they behave well.