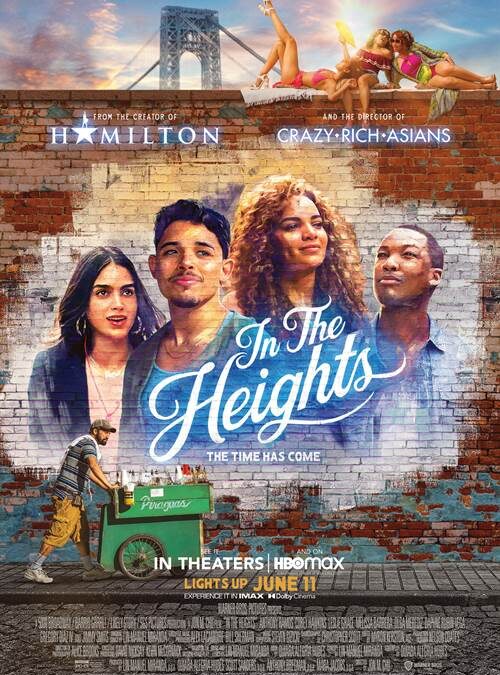 Jon M. Chu’s “In the Heights,” an adaptation of Lin-Manuel Miranda and Quiara Alegria Hudes’ Tony-winning Broadway musical, is a big, colorful and jubilant movie – and one that’s simply breathtaking on the big screen. The richness of the visuals, virtuosic camerawork, immaculately choregraphed dance numbers and beautiful vocals simply won’t play as well on any home theater set-up. Of all the films released in the last few months since COVID-19 restrictions have eased, I can’t think of a better argument for a trip to the cinema than this film.

“In the Heights” is nothing if not committed to depicting the spirit of a specific neighborhood – New York City’s Washington Heights, located above Harlem and made up of a largely Dominican American population. Miranda, who grew up in Washington Heights and Inwood, has infused this project with a great deal of love and care for his neighborhood, and Chu executes the material brilliantly.

Anthony Ramos stars as Usnavi, the owner of a bodega in the Heights and our guide to the inhabitants of the neighborhood. The block is undergoing a tremendous amount of change. The local hair salon, run by Daniela (Daphne Rubin-Vega), is moving to another neighborhood. Rosario’s Car and Limousine is on the brink of being fully sold to a neighboring business, as owner Kevin (Jimmy Smits) struggles to put his daughter Nina (Leslie Grace) through college. Nina is plagued with doubts of her own about whether her presence at Stanford University is a betrayal of her roots. Usnavi, meanwhile, dreams of escaping to the Dominican Republic to run his late father’s business – though it would mean abandoning his longtime crush Vanessa (Melissa Barrera), who is attempting to become a fashion designer. Watching over all of these characters is the motherly Abuela Claudia (Olga Merediz), who gets perhaps the best musical number in the entire film.

If I’m describing the characters more than the actual story, it’s because the narrative evolves so naturally from their struggles. Before we’re even caught up in the story mechanics, “In the Heights” takes the time to get us invested in these characters’ inner lives.

More than anything, “In the Heights” seems to be about characters struggling with how best to give back to their community. Their hopes and aspirations for a life beyond Washington Heights directly conflict with their desires to preserve and honor their neighborhood, and it’s quite moving to watch Usnavi, Vanessa, Nina and Benny (Corey Hawkins) navigate these challenges.

“In the Heights” is a captivating experience. Although it’s done quite well on HBO Max, the film has struggled to find the same audience theatrically – which is unfortunate, given that the movie works wonders on the big screen.