“Marcel the Shell With Shoes On” 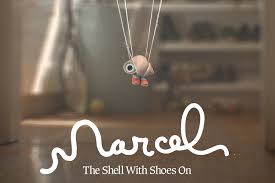 Dean Fleischer-Camp’s “Marcel the Shell with Shoes On,” a delightfully offbeat summer release geared equally toward kids and adults, is based on a series of popular YouTube videos about a talking shell named Marcel. The character is voiced by Jenny Slate, who co-wrote this film, and much of the droll humor and sweetness of those viral videos has been carried over into this breezy, heartfelt feature adaptation.

The film is told in a faux-documentary style, in which a filmmaker named Dean (Fleischer-Camp) discovers Marcel while staying at an Airbnb. Marcel lives with his grandmother, Nanna Connie (Isabella Rossellini) – but the rest of his family is gone, having been tossed out of a sock drawer and into a suitcase by the prior tenants, a bickering couple who have since moved out and gone their separate ways.

After Dean uploads several videos of Marcel to YouTube, the talking shell becomes an internet sensation – which opens up the possibility that Marcel may be able to track down his family. With Dean’s help, Marcel spreads word across the internet about his missing family, culminating in a sit-down interview with Lesley Stahl of “60 Minutes,” who greatly assists in the search.

At first, “Marcel the Shell With Shoes On” may feel rather slight – this is a largely interior, rather lo-fi movie that doesn’t represent a huge jump in scale from the original YouTube videos. But the film quietly sneaks up on you, and by the third act of the movie, I had gone from amused to truly emotionally engaged. Whether it’s the sweet relationship between Marcel and his grandmother or Marcel’s weirdly moving performance of “Peaceful Easy Feeling” by The Eagles, “Marcel the Shell With Shoes On” has more emotional heft than it initially lets on.

The film is rated PG, and I can’t think of anything objectionable in its 90-minute run-time. If your kids have already seen “Minions: The Rise of Gru” and are looking for something a little different, “Marcel the Shell With Shoes On” is well worth your time.