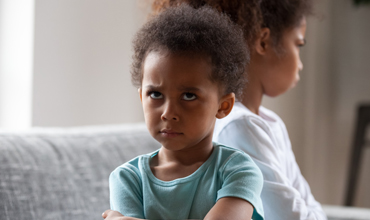 Q.  My wife and I each have a child from previous marriages living with us (ages 14 and 12). We also have two children from our marriage (ages 4 and 9 months). The kids all compete for attention from us. They fight with each other over such things as TV time, as well as computer time or who gets to sit in the front seat of the car. A favorite cry is “it’s not fair.” Could you help us understand sibling rivalry? Is it normal? Are there things we as parents can do to minimize the rivalry and help the kids build strong bonds with each other?

A.  Sibling rivalry is normal. It’s common for brothers and sisters to fight for attention– who gets control over the TV or computer, who gets the best grades and many other issues too. Younger kids often want equal privileges with older siblings. Some kids envy a sibling’s talents or skills. Sibling rivalry includes name calling, tattling and constant competition for the attention of parents.

Researchers do mention some negatives about sibling rivalry such as: too much rivalry can lower self esteem and contribute to unwanted behaviors such as drug abuse as adults. Other sources suggest that troubled sibling relationships in children can lead to damaged adult relationships with each other. At some point when the rivalry is more than healthy competition, you’ll want to minimize it and help your kids build strong bonds. I have the following suggestions:

Hopefully some of these suggestions will help you minimize sibling rivalry and help your kids to have stronger bonds with each other.