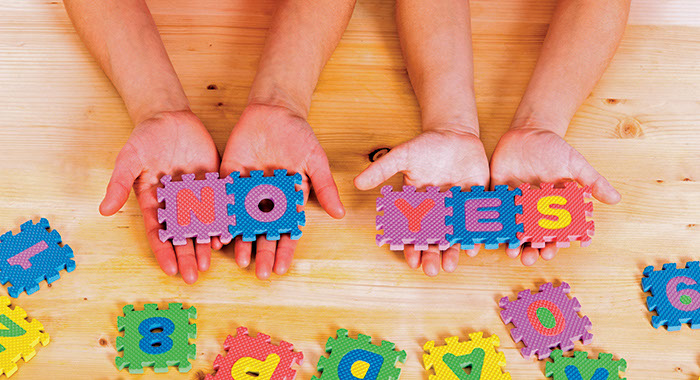 Q  We’re parents of four children ages 3 to 14. Together and separately, there are times my husband and I have to tell one or more of the kids “No.” This response is sometimes met with begging and pleading, whining and other forms of resistance. What advice can you share about saying “no,” and how we can get our kids to respond better when they hear it?

A.  Sometimes when I’m out shopping I catch parents doing something so well that I want to share it with readers. A mother was behind me in line at a store, with a toddler in a stroller and a preschool daughter beside her. The mother said to the daughter, “Don’t give your brother candy when I said no. No means no.”

I’ll give you some suggestions for saying “no” more effectively. First, let me point out that saying “no” to toddlers differs from saying it to teens. Even two teens may need different approaches. So, use the suggestions that work for you.

1. Say “yes” as often as you can. Kids tire of hearing the word “no.” Save it for when you really mean it, not when you mean maybe.

2. Be nice and calm in your approach. When you are yelling or demanding, kids don’t respond as well.

4. Offer other choices. For example, when a child wants sweets before dinner, instead of saying “no,” you can use “yes.” Try it this way: “Yes, you can have it after dinner. I can give you a healthy snack now.” Or you might say: “Yes, I’ll put this cookie on a plate with your name on it and put it up where we can find it after supper.”

5. It’s hard to deal with teens after you say “no” to something they were excited about like a party at a friend’s house. Your teen may respond by whining, moping, being angry or using intimidation. On the other hand, he might respond by being super sweet or trying any number of behaviors to get you to change your mind. If you said “no,” hopefully it makes sense to stick to it. Otherwise, you must explain why you are changing your mind and suggest that it will not happen often or without exceptional reasons.

6. Be respectful to teens by not talking down to them. When they want something that will involve an answer from you, listen to them and ask questions first. For example, if a teen asks to go to a friend’s house party, you can ask such questions as how she will get to the party and back home and whether the parents will be there. You can call the parents to ask questions about the supervision of the kids. You can talk to the teen about a reasonable curfew and the “no alcohol and drug” rule as well as any other rules you have.

7. Teens need a few house rules. You can let the teen get involved in their own “no’s” by having them write and sign a contract for themselves.

When you feel your children are pushing too hard to get you to change your mind, remember that you are the one in charge. You and your husband are the parents. Kids need limits to grow up to be able to say “no” to themselves when needed.