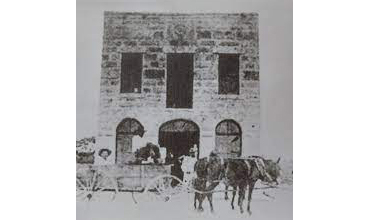 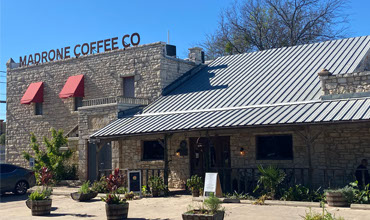 Before it ever sold pizza or coffee, the limestone building at 6266 US-290 was once called the Old Rock Store, constructed in 1898.  It was built by James A. Patton, a former Texas Ranger and often referred to as the unofficial mayor of Oak Hill. Since then, the building has been home to a post office, steakhouse, plant nursery, masonic lodge and an art gallery, just to name a few. In 1970, the building received its State Historical Survey Committee Official Historical Medallion. It later became home to Austin Pizza Garden for 27 years, but sadly became another casualty of COVID-19 restaurant closures. But before APG closed its doors, many employees reported hearing footsteps in a vacant upstairs party room after hours, when the restaurant was quiet.

Haunted or not, the bright red awnings of what’s now Madrone Coffee Co. will catch your eye as you enter its old gravel driveway.  The Old Rock Store State Historical Medallion is secured onto the limestone façade next to the wooden entry door. Madrone Coffee Co. has made the building its own, but the integrity of the old architecture remains. The original fireplace is still just as inviting, begging you to grab a seasonal latte and cozy up. Pop over on a Saturday morning and catch Frida’s Cocina food truck for breakfast or lunch and let the kids play on the playscape. The original Old Rock Store may be long gone, but a rich history is soaked into the limestone walls of this historic Austin landmark where past meets present.

Brittany Williams is a writer and realtor in Austin where she loves exploring the city’s green spaces with her husband, son and daughter.