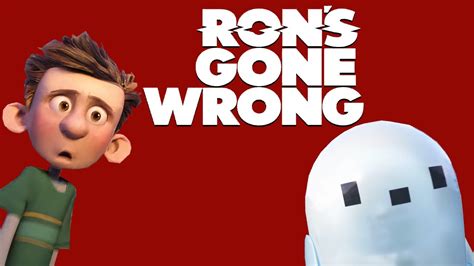 Twentieth Century Studios and Locksmith Animation’s “Ron’s Gone Wrong” is a pleasant, diverting family film that’s almost entirely about smartphone culture. If this movie had been released twenty years ago, it’d absolutely mystify everyone on planet Earth – and even now, I wonder how someone who has never owned a smartphone would react to it. I don’t mean to indicate that “Ron’s Gone Wrong” endorses living one’s life in front of a screen – in fact, it’s a pretty direct critique of that behavior – but it’s still singularly focused on how its target audience consumes media in 2021.

Barney (Jack Dylan Grazer) is the one kid at his middle school without a B-bot, a borderline-sentient being that’s basically an iPhone inside a droid’s body. In addition to missing out on the latest technological fad (from Bubble, the film’s stand-in for Apple), Barney also doesn’t have any friends – a dilemma that a B-bot could potentially solve.

When Barney’s father Graham (Ed Helms) sees his son’s exclusion from the craze, he decides to finally get Barney a B-bot for his birthday. With the Bubble store having closed for the day, however, the best Graham can do is buy a bootleg B-bot that fell off the truck. This B-bot, who will soon be named Ron (Zach Galifianakis), is glitchy from the get-go, lacking the safety features that keep most B-bots reigned in. But what the bot lacks in elegance, it more than makes up for in terms of actual companionship.

Of course, once Bubble COO Andrew Morris (Rob Delaney) becomes aware of a rogue bot wreaking havoc, the powers that be attempt to find Ron and crush him – sending Barney and Ron on the lam. Bubble CEO and B-bot creator Marc (Justice Smith), however, sees Ron as a beacon of hope – a friendship-oriented bot closer in spirit to his original intention (before his invention became repackaged as a walking smartphone).

As someone who grew up on children’s films like “The Lion King” (1994) and “Beauty and the Beast” (1991), I’m still not certain what I think of the self-reflexive, media-consumed aesthetic of a film like “Ron’s Gone Wrong,” in which vlogging and viral videos constitute the majority of visual information we’re given (with pop-up appearances by various Disney properties thrown in for good measure). While “Ron’s Gone Wrong” is certainly on to something with regard to the overexposure of media on children (ironically, the mother and child who sat in front of me spent the entire movie on their phones – essentially proving the film’s point), I’m not sure that the best way to communicate with kids is to dress a movie up as a feature-length smartphone extravaganza. And I couldn’t shake the fact that the movie basically closes with the suggestion that artificial intelligence can be used for good in the world. We all know how that ends, right?

These quibbles aside, “Ron’s Gone Wrong” is an entertaining outing to the cinema. The animation is beautiful, and there’s plenty of fun visual information packed into each frame. The film is rated PG, and I’d say it’s appropriate for children ages 6 and above. It’s now playing in cinemas.