The Bullock Museum Tells the Story of Texas 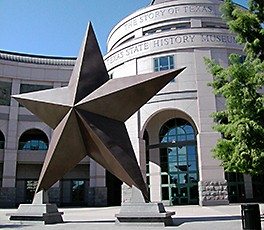 March 2 is Texas Independence Day, commemorating the moment when Texas declared its independence from Mexico. Given that Austin is home to the state’s history museum, we asked Dr. Victoria Ramirez, director of the Bullock Texas State History Museum, to talk with us about Texas history and what the museum has to offer visiting families.

On the museum’s namesake. Bob Bullock spent the majority of his life in the public eye. When he was Lieutenant Governor, he felt that Texas needed to have a history museum. Sadly, he never saw it open, but he did get to see the vision and plans. He was the driving force behind it.

Interestingly, when Bob Bullock had this vision for the museum, the La Belle shipwreck had just been found off the coast of Texas. He was the one to say, “That ship belongs in the state history museum.” It’s an exciting time to be here at the museum, because we are fulfilling that vision.

On its visitors. We see about 400,000 visitors a year. We also reach about 100,000 school kids and teachers. If you’re here during the holidays or spring or summer break, you see people from not only throughout the state, but throughout the country.

On the permanent and special exhibitions. The museum’s Texas History Gallery is our permanent gallery. We have about 600 original artifacts on view, and we rotate about 150 out every year, so there are always new things to see. Our special exhibitions are here for 12 to 16 weeks. They let the museum tell a deeper story about an era or place or theme.

In March, “Roller Derby” will open. Roller skating has always had a history in the U.S., but roller derby’s roots are in Texas. We’ll have uniforms, artifacts, posters and photos. It’s a fun way for families to learn about a sport that has some serious Texas roots.

This summer, we will celebrate African-American history, family and story-telling. June 19 of this year is the 150th anniversary of Juneteenth. It’s a very significant date in Texas history.

On the museum’s other offerings. Films are a big piece of what we do. The Texas Spirit Theater is a 3D theater with special effects. So, if you’re watching a film and it’s raining, it starts misting in the theater. We have a terrific film on the La Belle called Shipwrecked; it tells the true story of a 14-year-old boy who survived the shipwreck. When they show the ship sinking, you feel it in your seats.

Our IMAX theater closed in January so we could install a brand new projection system, audio system and screen. It is open now, and it will blow your mind. For me, IMAX has always been that complete, immersive, totally awe-inspiring experience. And it’s even more so now.

On the challenge of telling the story of Texas. Texas is big and diverse and geographically varied. Visitors want to connect to their history. We don’t want people, if they’re from far West Texas or the Valley or far East Texas, to feel like we’re not telling their story.

On special events in March. We are having a big celebration on Sunday, March 1, to celebrate Texas Independence Day. It’s part of our free First Sundays program. We will have activities for visitors of all ages. We will try and set the world record for the most people dressed as Texas heroes. That’s a celebratory day for us.

On what she thought of history as a kid. I always loved history. I like to hear the stories of things. I like to hear why things are the way they are. I think that’s something museums do really well. You can learn about history just about anywhere, but there are very few places where you can see history. So many people are experiential learners. They want to do; they want to participate.

On her favorite exhibition. The story of the La Belle leaving France and coming to the Texas region is fascinating. The story of its sinking is just as interesting. And the story of finding and conserving it is equally interesting. We are one of the few history museums in the world that have such a complete 17th century shipwreck. I love that this story of France’s interest in Texas changed everybody’s perception of early Texas history, because we all thought it was only the Spanish who were interested in the area.

To see a shipwreck with weapons, cooking utensils, shoes, a rat skeleton—it really tells the whole story of what the colonists thought they needed to make a life here and what happened to them along the way.

Downstairs is just a temporary exhibition; it’s giving us a chance to put the ship together. A lot of foundations and individuals and corporations are supporting us installing the shipwreck permanently. The plan is, there will be a deck of glass over the ship’s hull that visitors can walk on. They can look down and see the cargo. It’s going to be the jewel in our crown.