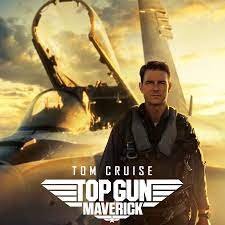 After a three-year wait, Joseph Kosinski’s “Top Gun: Maverick,” the belated sequel to Tony Scott’s immensely popular “Top Gun” (1986),  has arrived in cinemas. The film’s delayed release (due primarily to COVID-19) has created a great deal of anticipation for the movie, and I’m happy to say it’s perfectly warranted. Not only is “Top Gun: Maverick” an excellent sequel to the original film, but it also contains the same exuberance for death-defying stunts as star Tom Cruise’s recent “Mission: Impossible” movies. In fact, the latest “Top Gun” might as well be a “Mission: Impossible” spin-off film, in which Ethan Hunt takes a break from espionage and decides to train some fighter pilots. That the film is able to serve as both a continuation of Cruise’s more recent high-octane action outings and seamlessly exist in the same universe as the original movie is a true feat of filmmaking.

Cruise stars as Captain Pete “Maverick” Mitchell, a Navy test pilot who is recruited by his former colleague (and now Admiral) Tom “Iceman” Kazansky (Val Kilmer) to instruct an elite team of pilots in the Top Gun program – the same program, of course, in which Maverick excelled in the original film. The team’s mission is to destroy a uranium facility, which is located at an incredibly dangerous low altitude between steep mountains.

On NAS North Island (where the Top Gun program is based), Maverick is something of a local legend. However, for one of his students, Lt. Bradley “Rooster” Bradshaw (Miles Teller), Maverick’s presence comes with a lot of baggage. Bradshaw’s father was Nick “Goose” Bradshaw, memorably played by Anthony Edwards in the 1986 film. Goose was one of Maverick’s closest friends. After his death, Maverick took steps to reject his son’s application to the Naval Academy – not wanting Rooster to meet the same fate as his father.

In one of the film’s most memorable supporting turns, Austin’s own Glen Powell plays Lt. Jake “Hangman” Seresin, a cocky pilot who serves as Rooster’s nemesis within the squad. Powell has been giving memorable performances for years (most notably in Richard Linklater’s “Everybody Wants Some!!”), and I hope his turn in this sequel will further propel him into movie star status.

The third act of “Top Gun: Maverick” is genuinely exhilarating. We fully understand the difficulty of this mission, and watching these skilled pilots attempt to pull it off makes for one of the most intense and entertaining spectacles of any recent summer blockbuster. The film is emotionally engaging, too. Maverick’s sit-down with Iceman (who, like Kilmer himself, has lost his ability to speak from throat cancer) is particularly moving, as is Maverick’s relationship with Penny (Jennifer Connelly), a bar owner on NAS North Island. There’s also a somewhat melancholy acknowledgement on the film’s part that the seemingly-ageless Cruise won’t be doing this forever – not that that’s going to deter the world’s biggest movie star. When an Admiral tells Maverick that the end is inevitable and his kind is headed for extinction, Cruise quickly retorts, “Maybe so, sir. But not today.”