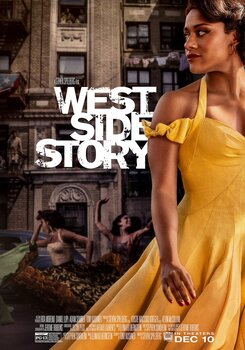 Nobody does it better than Steven Spielberg. I’ll admit I initially questioned the necessity of a remake of “West Side Story.” The spellbinding Broadway musical was first adapted into a film in 1961, winning ten Oscars, including Best Picture. Yet, Spielberg – along with key collaborators that include screenwriter Tony Kushner and cinematographer Janusz Kaminski – make this endeavor feel essential from the first frame to the last. This is a big, colorful and emotionally wrenching time at the movies.

On New York’s Upper West Side in the 1950s, two street gangs are engaged in a turf war – the Jets, comprised of second and third generation Irish and Italian Americans, and the Sharks, who are largely Puerto Rican. The two gangs are stand-ins for the Montagues and Capulets of Shakespeare’s “Romeo and Juliet.” The star-crossed lovers, who further escalate the gangland conflict, are Tony (Ansel Elgort) and Maria (Rachel Zegler). After a chance encounter at a local dance, the two fresh-faced teenagers from opposite sides fall head over heels for one another, incensing both gangs in the process. Maria’s brother Bernardo (David Alvarez), the leader of the Sharks, meets with Riff (Mike Faist), the leader of the Jets, to discuss the terms of a “rumble” – a planned, violent confrontation between gangs that, as anyone who is familiar with “Romeo and Juliet” knows, does not exactly set the course for Tony and Maria’s happily-ever-after.

The aforementioned “rumble,” occurring about two-thirds of the way through “West Side Story,” is one of the most astounding and electric set pieces of Spielberg’s career. It doesn’t matter if you know the outcome. It is harrowing and tense, and one of the most memorable scenes in any movie this year.

This version of “West Side Story” is especially effective as an illustration of how two groups can be pitted against one another, each thinking the other is responsible for its disenfranchisement, while the real perpetrators remain above the chaos (in this case, the City of New York clearing the neighborhood for what will become Lincoln Center). Spielberg and Kushner have made some fascinating changes to the source material in this regard. The presence of Puerto Ricans is not the cause of the Jets’ disenfranchisement. That situation stems from growing up without parents and role models, as articulated in the number “Gee, Officer Krupke.” Yet, anti-immigration sentiment serves as an easy outlet for the gang’s rage and feelings of victimhood.

Such changes by Spielberg and Kushner don’t feel forced. Instead, they take thematic strands that have always been a part of the story’s text and flesh them out in a way that resonates even more with modern audiences. After all, “West Side Story” was a musical that tackled nativism and class divisions long before those ideas were prevalent in mainstream musicals.

It’s a particular thrill to watch Spielberg wield his visual wizardry in a movie musical. Most of his contemporaries – Martin Scorsese, Francis Ford Coppola, Woody Allen, Robert Altman – have made big-screen musicals to varying degrees of success, but Spielberg’s sensibilities are perhaps the most in-tune with the showmanship needed to craft a truly memorable one. “West Side Story” is another jewel to add to the director’s incredibly varied 21st century filmography, which has tackled startling visions of the future (“Minority Report”), reckonings with vengeance (“Munich”), whimsical comedy-drama (“Catch Me If You Can,” “The Terminal”), pure popcorn entertainment (“The Adventures of Tintin,” “Ready Player One”) and, perhaps most profoundly, detailed portraits of American history (“Lincoln,” “Bridge of Spies,” “The Post”).

“West Side Story” is rated PG-13 for some gang violence and thematic content, though there’s very little in the movie that could be considered truly objectionable. I’d recommend the film for ages ten and above.