6 Myths About Speech and Language in Children 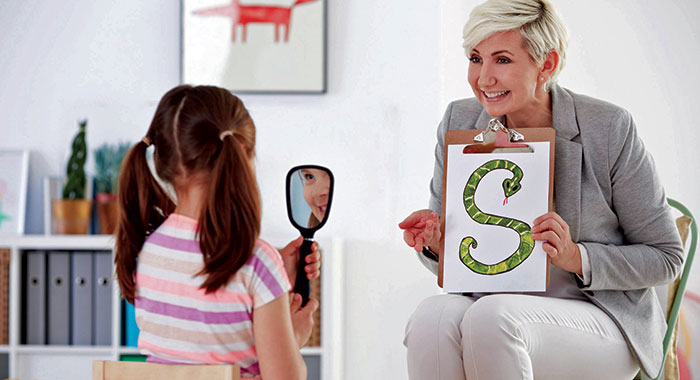 If you’re concerned about your child’s speech, you’ve probably done some research – and chances are, you’ve also gotten some advice (solicited or not) from friends and family. There is a lot of information out there, some of which is misguided or just plain wrong.

As a speech-language pathologist, I find it important to provide evidence-based education to help parents make decisions about their child’s care. To that end, here are some common myths about speech therapy and how children develop speech and language.

Myth #1: Children will outgrow their speech or language delay, so it’s best to wait and see.

It’s true that every child develops on a different timeline. About 70% to 80% of children who are “late bloomers” will eventually catch up to their peers. But what about the 20% to 30% who don’t? Delays in speech and language may point to a cognitive or developmental issue. These delays can lead to difficulty socializing, participating in school, learning to read and more. That’s why a “wait and see” approach isn’t always the right choice. Speech and language skills build upon one another. So, the longer intervention is delayed, the more a child can fall behind. Getting a speech evaluation can help you determine the best course of action.

Myth #2: Teaching babies how to sign will stunt their language growth.

You may worry that if your baby learns signs to communicate, he will be less likely to learn to talk. Not true! Before children say their first words, they use other forms of communication to express themselves, such as crying and pointing. Teaching your baby simple signs enables him to easily express wants and needs before he is able to talk. As a child’s imitation of sounds and words increases, these gestures typically fade away.

Bonus: Often, the more tools children have to communicate, the less frustrated they will be. Wouldn’t you rather your child gesture “all done” than throw her applesauce on the floor?

Myth #3: Learning two languages at once can cause a speech delay.

This is a common myth, especially as more children grow up in households with multiple languages. The fact is, research shows that raising your child in a bilingual household, or teaching him more than one language, does not cause a speech or language delay. It actually offers lots of benefits, from cognitive advantages to greater social skills.

This myth is likely rooted in the common practice of “code switching,” which happens when people mix words from two languages in the same sentence.

Children learn language by mimicking those around them. They also have a limited bank of vocabulary and will often “select” a word from the other language to express their thoughts. This isn’t a delay at all – it’s actually quite resourceful, as the child tries to figure out which word is right for the circumstance.

Phones, tablets and TVs are part of modern life, and they’re not going anywhere. When it comes to screen time, moderation is the key.

The negative effects of passive screen time on speech and language development have been well documented. One study in particular surveyed the effects of media exposure on more than 1,000 toddlers under two years old. Researchers found a strong correlation between media consumption and language development; the more videos that toddlers watched, the fewer words they knew or said. Another study showed that the more time children spent using handheld screens, the more likely they were to develop a speech delay.

For guidance on using screens in a positive way with your child, the American Academy of Pediatrics suggests making it as engaging and interactive as possible. Try to consume media with your children, instead of simply sticking them in front of a TV. Talk about what he is seeing, ask questions and make connections between your child’s life and the events on the screen.

Myth #5: Teenagers are too old for speech therapy.

Myth #6: Speech therapy is more effective in person than online.

Speech therapy works best when caregivers are actively involved in their child’s progress. Learning speech and language is like learning any other skill: it requires practice. Your speech therapist should provide you with the coaching, strategies and activities you need to keep practicing with your child between sessions. For this reason, the place where speech therapy is delivered is much less important than how it is delivered.

Online speech therapy is preferred by many families. Teletherapy eliminates travel times; provides quality treatment in a child’s home, where they feel most comfortable; and allows families to easily participate in sessions at times that are convenient for them. Plus, many studies have shown that online speech therapy is just as effective in helping children reach their communication goals.

Leanne Sherred, M.S., CCC-SLP, is the president and
chief clinical officer of Expressable. Based in Austin, Sherred oversees over 60 talented speech therapists who work with children around the country.